Tasting Room Closeouts – Are They Really a Deal?

Posted by John in Insider Secrets, Wine Bargains on June 25, 2014 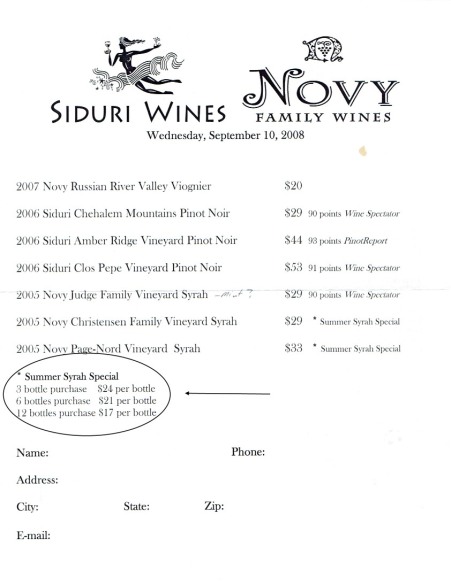 If you’re like me, you love a good bargain; and bargains abound in wine country tasting rooms. But are those “deals” really a deal – who’s getting the last laugh? Turns out, you are.

Savvy wine buyers know to be wary of wine shop closeout bins. Like a yard sale, there can often be some real finds there for the person who knows what they’re looking at, but just as often you’re looking at junk. They’re taking a loss and dumping the slow sellers regardless of reason. In the tasting room, however the economics in play are quite different.

When a winery brings their wine to market they have a couple of options (I’m ignoring the bulk market for now.)

See our post on June 22 for more detail on how wine pricing works. It’s really helpful!

When a tasting room puts something on closeout, even a huge one – say 50% – they’re rarely losing money.

But is the wine any good? Believe it or not, probably so. In my experience, when a tasting room is running a closeout, it’s usually to make room for the next vintage of that particular wine. These wines were either never put into distribution (if the winery distributes), or there wasn’t sufficient quantity remaining to attract the interest of a distributor. It’s probably on the tasting menu and if not, they often have a bottle open behind the counter if you ask. I’m only leery if they absolutely refuse to let you taste it.

Think of it this way – the tasting room is the public face of the winery, and most of them (if they’re well run and actually make good wine) won’t knowingly sell junk in there. There are too many other ways in this business for wineries to get rid of lousy wine and still make a buck.

So feel free to gobble up those tasting room closeouts, knowing that you’re getting a decent bottle of juice, saving some coin, and making the winery happy.

Breaking Down The Cost of a Bottle of Wine

Breaking Down The Cost of a Bottle of Wine

I found this article earlier in the week and thought it would serve as a great intro to a piece we’ll have out later in the week on tasting room wine discounts.  In case you’ve ever wondered how much a winery gets paid for that $15 bottle of Malbec you just bought, why restaurant wine prices are so outrageous, or how, exactly, Trader Joe’s can afford to sell wine for $3-a-bottle,  I think you’ll find this a fascinating read.  Have a great rest of the weekend!

And thanks so much for stopping by!  Our first week “live” generated a surprising amount of traffic.  Thanks again for taking the time to check us out!  We appreciate all of you.

How to save a few bucks on your next rental car

The art of getting a deal on a rental car is complex enough that I figured it warranted its own blog post.
For the wine country traveler looking to save a buck, renting a car can be maddening.  Over the past few years rental car companies have been steadily raising their rates; gone are the $16-a-day Thrifty specials.  Fortunately, there are still a few tricks of the trade you can employ to save a bundle.

At Dirt Cheap Wine Country, we’re able to reliably get our cars down to half of what  Kayak, Orbitz, and  Expedia are quoting, and we can often beat Priceline!
A few general considerations before we get started:
Here are some of our best tricks:
Associations and Employers
The first (and easiest!) step to securing a cheaper rate is to see who you’re already affiliated with.
Coupons
Rental car coupons are nearly always digital.  Often they are listed on the rental car comapnies’ web sites (or, for AAA/USAA/Cosctco members, through their respective travel portals.)  More obscure coupons can also be found on Internet message forums such as Flytertalk.com and FatWallet.com and are e-mailed to loyalty program members.  Old-fashioned paper coupons are also printed in the nationally-distributed Entertainment Books.
Carrentalsavers.com is another particularly useful coupon finder.  Most coupons rotate out on a quarterly basis.
It is often possible to “stack” coupons on top of association/employer discounts, allowing you to receive a double discount!  While most rental car sites are pretty straightforward, some have multiple boxes in which to enter a discount code; you may have to do some finagling to get the appropriate code into the correct code box.
Hotels
This is a trick that was only recently pointed out to me.  At ultra-major airports such as LAX, some of the larger nearby hotels will have a rental car office inside the hotel.  Their rates may or may not be any cheaper, but since they’re not technically at the airport they usually don’t charger the expensive airport taxes.
To use this trick,
Weekend/Weekly Deals
Rental car companies are desperate to unload their cars on weekends, so if you’re taking a weekend trip, Hertz and Enterprise both offer weekend specials – usually in the ballpark of $10-$15 per day.  Often the most aggressive coupons and discounts are also applied to weekend and/or weekly rentals.
Local Specials

These are few and far between, but there are a couple worth noting.

While not a trick for the novice traveler, some people have reported great success using the rental car companies’ own foreign sites (ie. budget.co.uk vs. budget.com) for domestic rental booking.  This works by taking advantage of currency exchange rates as well as specials designed to attract foreign visitors to the US.  Sometimes the rates are cheaper, and since they’re quoted in foreign currency the conversion may work in your favor.  This is especially useful for folks with an overseas address.   Be aware that if you have a US address your reservation MAY be rejected.  Also be aware that some of these rates include insurance for which US residents are not eligible.
AutoSlash
AutoSlash.com offers a terrific service for the Dirt Cheap Traveler (we’re not affiliated, we just love ’em!).  Once you book your reservation, you can plug the details into their web site and it will re-shop your reservation daily..  If the price drops, they’ll send you an e-mail with instructions on how to re-book.  On our last trip, AutoSlash found a promotion that saved us over $30 on a 4-day rental!
If all else fails…
There’s always Priceline.com and Hotwire.com.  One very useful strategy is to check Hotwire first, and then go over to Priceline and bid 25% lower than the Hotwire rate.  We use these only as a last resort because
However, there is the occasional trip where they’re the best option.  On a recent trip to Napa, the San Francisco airport was completely sold out of cars.  Priceline came through at $30 a day when, even with the best of discounts, $70 a day was the lowest price to be had anywhere else.
I  hope you find this guide useful.  If you have any other tricks you’ve picked up as you travel, put them in the comments and we’ll include them in the next revision!

Today I’m re-launching the blog as Dirt Cheap Wine Country and I hope that you’ll find it a refreshing departure from the usual wine blogs.  Why the change?

In 2012, wine blogger Tom Wark issued a challenge on his massively popular Fermentation blog – The Top 10 Wine Stories Needing to be Written. One in particular caught my eye:

Dirt Cheap Wine Country It’s a counter intuitive wine country travel story—and probably difficult to write.  But it could provide a fantastic counterpoint to the luxury-oriented wine stories that proliferate. Is there a way to “DO” wine country dirt cheap? From cheap hotels and cheap food to no-cost tasting room?

Indeed, why isn’t anyone telling that story?! There are many who want to live the “wine lifestyle,” and for whom travel to wine country should be the ultimate luxury experience.  It often seems like every wine writer on the planet caters to these aspirational travelers.

There are countless others however, who travel to wine country for one reason and one reason alone: the wine and the connection to the people and places that make it.

They may or may not be budget-conscious, but they come to spend their money on wine, not lifestyle.  They appreciate the quality of a few nights at the Renaissance, but are just as happy at a Best Western.  They would like a nice meal or two, but in a pinch a taco stand will do just fine.  They hope to bring home a few trophy bottles, but will fill the rest of their cases with bargains, or at least reasonably priced daily drinkers.

You see, my friends, as a regular wine country traveler for the past ten years, this is exactly how I travel.  And as my high school english teacher taught me, for every one person with an opinion who chooses to share it, there are countless remaining, silent glad someone spoke up.  I know that’s true because I meet you on every trip: whether you rode into Napa in an RV, were slumming it with us at the Holiday Inn Express, or gnoshing on biscuits and gravy at the Paso Robles diner.  And we compare notes in the tasting rooms of some of the best wineries on the planet.

Until now my fellow budget traveler, aside from a few coupon sites, there’s really nobody talking to us.  And that’s what Dirt Cheap Wine Country is all about.  This is not a coupon site, or a wine review blog – there are plenty of those.  This is how to “do” wine country dirt cheap!  A wine country resource and community for the rest of us.

So welcome to Dirt Cheap Wine Country!  I value your input and comments. Until we meet again in the tasting room – cheers!